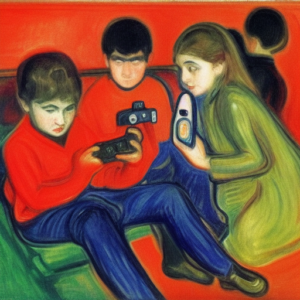 Concerns about the impact on health are raised by the sharpest growth, according to a global analysis, among certain age groups.

According to studies, the dramatic increase in screen usage is linked to worse diets, worse eye health, declining mental health, and behavioral issues.

According to the first worldwide evaluation of studies, primary school students’ screen time rose by an additional hour and 20 minutes per day on average during the Covid epidemic.

Calls for action to stop the detrimental effects on the health of millions of youngsters have been sparked by the results.

The age group between six and ten had the largest daily rise in screen use. However, all age categories, including adults, had “substantial” increases, according to Anglia Ruskin University, which oversaw the overall study of research.

In eClinicalMedicine, a publication of the Lancet Discovery Science journal, the researchers said that “our review indicated that all age groups increased their overall screen usage.” Children in primary school reported the biggest gains, followed by adults, teenagers, and young children. All age categories saw a rise in leisure screen usage, with primary-aged children reporting the biggest increases, followed by adults, young kids, and teenagers.

Overall, greater time spent staring at screens, including those on television or computers, was linked to adverse effects on nutrition, sleep, mental health, and eye health, according to research.

The biggest gains were seen in elementary school students, who added 83 minutes each day. Adults came next, taking 58 minutes, followed by teenagers (ages 11 to 17), taking 55 minutes. The least amount of time spent watching screens—35 minutes—was increased among children under five, yet even this small rise is nevertheless substantial.

According to Prof. Shahina Pardhan, senior author and head of the Vision and Eye Research Institute at Anglia Ruskin University, “this study is the first of its type to look comprehensively at peer-reviewed research publications on increases in screen usage during the pandemic and its impact.”

“By combining many research, we gain a far more realistic picture of screen time among the public and its related health implications,” the author claimed. There is some variation among the studies examined, as there is with any study of this kind.

To minimize any detrimental effects, screen time should be decreased whenever possible, according to the overall picture. Negative consequences on sleep, mental health, visual health, and eating habits are a few of them.

The promotion of non-sedentary activities is crucial for reducing the hazards associated with increased screen usage.

89 studies from nations like the UK, US, Australia, France, Chile, and Israel were examined by researchers. The investigation had a total sample size of more than 200,000 persons and was specifically focused on increases in screen usage before and during the epidemic.

The survey also examined the different sorts of screen usage, and it discovered that all age groups were using screens more frequently for leisure purposes or for purposes unrelated to work or school. The largest growth was once more seen in children between the ages of six and ten.

In addition to having detrimental impacts on children, the study also found associations between increased screen usage and unfavorable outcomes for adults. These included detrimental effects on weight gain, weariness, and physical inactivity as well as negative impacts on food, eye health, and mental health, including loneliness, despair, and anxiety.

26 January 2023
in Pedagogy and Education

The dangers of Snapchat for kids

How is artificial intelligence affecting kids

Can too much screen time cause seizure?

Read more
Twitter Facebook Instagram Linkedin
Manage cookie consent
To provide the best experiences, we use technologies such as cookies to store and/or access device information. Consenting to these technologies will allow us to process data such as browsing behavior or unique IDs on this site. Failure to consent or withdrawing consent may adversely affect certain features and functions.
Manage options Manage services Manage vendors Read more about these purposes
View preferences
{title} {title} {title}